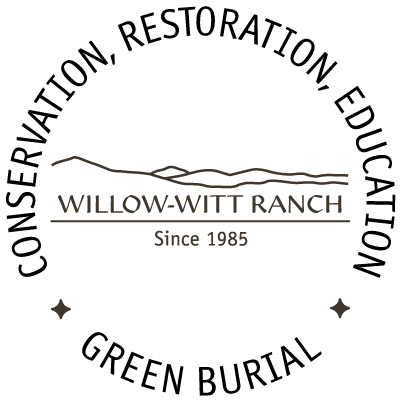 The high-country ranch in southern Oregon’s Cascades appeared deserted when Suzanne Willow, Lanita Witt and their daughter Brooke first saw it, covered in 4 feet of snow, in December 1984. They discovered it was for sale…and 10 times the acreage they were seeking. They purchased the 445-acre ranch at 5000’ elevation in January 1985 and have worked to restore forests, wetlands and wildlife habitat, while farming organically in this unique ecosystem.

From the beginning, the family planned to conserve and protect the land they loved, and Lanita and Suzanne planned to be buried here; an easy step for family-owned property. Over the years they buried dogs, cats, goats, two horses and occasional chickens in the farm yard and gardens. They chose final resting sites for themselves.

Elsewhere in the Rogue Valley, Pat Gordon had found her own forested nirvana and, like Willow and Witt, had planned to be buried on the land she loved. When an unexpected land sale excluded this option, Pat approached Lanita and Suzanne about the possibility of being buried on their property. It happened that they had been simultaneously exploring development of a cemetery as a path for conservation.

Fall at The Forest

Fall at The Forest

The natural (‘green’) burial movement began in the 1990’s and has gained popularity and momentum as more people contemplate their relationship to the earth and how their choices at death affect the natural environment and climate change.

The Forest Conservation Burial Ground on Willow-Witt Ranch near Ashland, Oregon was approved in 2020 by Jackson County and licensed by the Oregon Mortuary and Cemetery Board as Oregon’s dedicated ‘natural burial’ cemetery, and is seeking certification by the Green Burial Council as a Natural Burial Ground.

The natural (‘green’) burial movement began in the 1990’s and has gained popularity and momentum as more people contemplate their relationship to the earth and how their choices at death affect the natural environment and climate change.

Some traditional cemeteries allow ‘green’ burial as an option in an otherwise ‘unnatural’ environment; a conservation cemetery is dedicated to retaining and supporting the natural flora and fauna and to improving wildlife habitat.

“Conservation is about people needing and caring for land.  They’re going to conduct life-affirming activities: Getting married there, baptisms, confirmations, bird-watching, hiking, family picnics–all kinds of things are happening in these spaces because they’re conservation spaces first.  That’s the value of it.  It’s not just that we’re going to put people in the ground without concrete.  It’s about the big picture and how it affects people, the way we relate to death but also the way we relate to each other in life.”

The Forest has been developed to conserve the lands of Willow-Witt Ranch, a private in-holding in the Cascade-Siskiyou National Monument. Conservation of this unique natural landscape is enhanced by the minimal development needed for natural burials. Long term covenants and deed restrictions ensure that conservation values for the entire property are retained.

Willow and Witt formed an educational nonprofit in 2017, The Crest at Willow Witt, to offer outdoor school, camps, and programs for all ages to study the interconnections between humans and the natural world, beginning with the first people to live on this land thousands of years ago. They see The Forest as an extension of this connection and another way of caring for the land.

You can unsubscribe at any time and your information will never be shared.